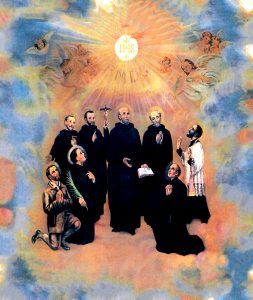 The layman René Goupil (1608-1642) had come to New France in 1640 as a donné (he was not bound to the Society of Jesus by religious vows, but by a contract to help the missionaries). He was with Father Isaac Jogues (1608-1646) and about 40 Hurons when the group was attacked on Lake St-Pierre in the St. Lawrence River by Iroquois. Father Jogues was taken prisoner and tortured in Iroquois territory. René Goupil was killed at Ossernenon on September 29, 1642.

Father Jogues was eventually held prisoner in Manhattan. With the help of the Dutch, he escaped and made his way to France and back to New France. On September 24, 1646, with the lay donné Jean de la Lande he left Trois-Rivières on a mission to evangelize the Iroquois. They were met with hostility when they arrived at Ossernenon because the Iroquois blamed the Blackrobes for the epidemic that had killed many people in their village. Father Jogues was killed by a hatchet blow on the head, on October 18, 1646. They next day, Jean de la Lande met with the same fate.

Father Antoine Daniel (1600-1648) grew up in Dieppe, France, and arrived in Quebec City in 1633 where, for seven years, he was the director of a school for young Hurons. Then he went to Huronia with Father Jean de Brébeuf. On July 4, 1648, the Iroquois attacked their residence at Ste-Marieamong-the-Hurons (near today’s Midland, Ontario) just as Father Daniel was celebrating Mass. They riddled him with arrows and bullets and threw his body into the flaming chapel.

Father Jean de Brébeuf (1593-1649) came from Normandy. He arrived in Quebec in 1625 and spent his first winter in the bush with Montagnais hunters in order to study their way of life. He was in Huronia from 1626 to 1629 and again from 1634 until his death. He and his fellow Jesuit Father Gabriel Lalement were caught in a surprise attack in a village they had named St. Louis, and taken to another one they called St. Ignace, where they were tortured for several hours and died, Brébeuf on March 16, 1649.

Charles Garnier (1606-1649) was born in 1605 or 1606 in Paris. He came to Quebec in 1636 and went immediately to Huronia, where he lived for the rest of his life. In 1647, he was sent to live on the edge of Huron territory; in a village the Jesuits had named St. John. It was attacked by Iroquois raiders in March 1649. During another attack, on December 7 the same year, while he was helping the wounded, Father Garnier was hit by two bullets and killed with a hatchet blow.

His companion, Father Noël Chabanel (1613-1649), had arrived in Quebec in 1643. While he was en route to safety on Christian Island after the December 7 attack, he stopped in exhaustion and was killed by a Huron apostate who threw his body into a river on December 8.

The Canadian martyrs were canonized on June 29, 1930, by Pope Pius XI. In 1940, Pope Pius XII declared them to be secondary patrons of Canada, after St. Joseph.

Some of the Canadian martyrs were inspired by published accounts written by earlier missionaries. They asked their superiors to send them to New France to bring the Good News of the Gospel to the indigenous nations of Canada. They were aware of the risks of being present to people who were themselves in danger of being attacked by their enemies. Several among them had consciously embraced the perspective of martyrdom. They wanted to bring Christian faith to life within Huron culture. They lived with the Hurons, learned their language, and shared their risks without hesitation.

Jean de Brébeuf had actually made a vow not to shrink back from martyrdom. His brother Jesuits said of him, “He seemed to have been born for this country. His nature was such that he mastered the ways of the Indigenous people, doing everything possible to touch their hearts and win them for Jesus Christ.” He was a man gifted in prayer who aspired to join Christ in his sufferings and cross. He wanted, like Our Lady with her pierced heart, to submit perfectly to “the will of God, though his heart had been filled with sorrow.”

A teacher, Antoine Daniel had made a musical adaptation of the Our Father and founded a school for young Hurons. Like the good shepherd who lays down his life for his sheep, he refused to leave the mission because he wanted to bring consolation to the dying.

Noël Chabanel had asked to be sent among the Hurons. Although he found it difficult to adapt to their way of life and had trouble learning their language, he had promised to spend his life in the mission. He confided to another Jesuit, “I don’t know what God wants to do with me, but I feel that I have changed in one way: I am by nature apprehensive, but now that I face grave danger and death is perhaps not far off, I no longer feel fear. May good come of my offering of myself to God. May I be wholly his.”

Such was Isaac Jogues’ zeal and strength of spirit that he was nicknamed the “Bird of Prey”. In his prayer, he begged God to let him suffer. When he was taken prisoner, he refused to try to escape. After he was tortured and escaped, he did so in order to return to the mission, which he called “His Spouse by Blood”. His companion Jean de la Lande said that his “desire to serve God drew him to a country where he expected to die.”

The martyrs were accused of casting spells on the Iroquois. They were blamed for spreading contagious diseases and other misfortunes. They were tortured and killed out of hatred for the Christian religion. Marie of the Incarnation, who knew them personally, wrote to her son in the autumn of 1649, “They were possessed by the Spirit of the Incarnate Word. It was that Spirit that drove them by land and sea to preach the Gospel and that made living martyrs of them even before the sword and fire consumed them. … We must feel the eight beatitudes deeply and despite the crosses we may encounter, we should practice complete self-negation so that not ourselves but God is glorified. This most precious gift was granted by God to the Holy Martyrs. … Never, my dear son, will you learn this through study but by humble prayer and in submission at the foot of the cross. The wonderful incarnate and crucified Word is the source of this disposition. It is he who grants it, sharing it with the souls he chooses and who are dearest to him, in order for them to follow and teach his divine precepts so that by this practice they are consumed to the end in imitating him.”